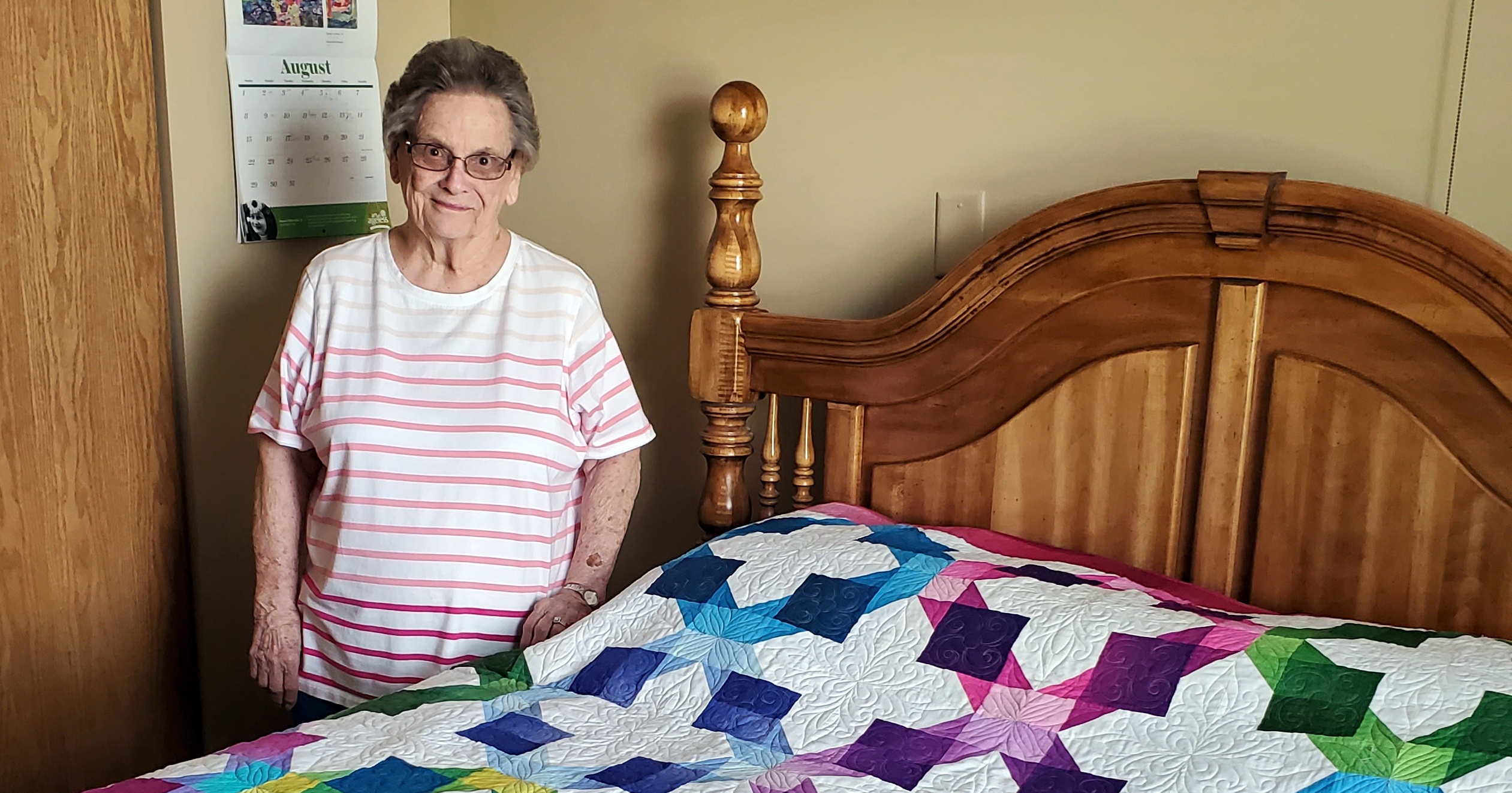 As a quilter, Wilda Buffo has a certain go-to style. But for this year’s Art is Ageless® juried art competition she decided to mix things up a bit with her quilt, “Shades of Color,” and was rewarded by being named a masterpiece-level winner.

“It was probably just the second time I have used bright colors in a quilt—I normally don’t use pastels, I like darker colors better—but you got to get out of your rut sometimes,” said Wilda.

The quilt was made by utilizing a roll of ombre fabric that featured various shades of different colors, which Wilda cut up and arranged to form a repeating geometric pattern.

“I don’t recall how many triangles and squares and rectangles were cut out of that, but let’s say a lot!” said Wilda.

While the process was time intensive and the end product certainly looks complex, Wilda claims it wasn’t quite as difficult as it appears.

“It wasn’t the most challenging quilt I’ve made—but not the easiest either,” said Wilda.

This isn’t the first time Wilda has competed in Art is Ageless® and won, but she insists that her participation has little to do with the recognition.

“I think it provides a good outlet for us around here. Everybody usually does something that they’re proud of, and you’re glad to show it to other people,” said Wilda. “I don’t go into it thinking I should get a ribbon—of course I’m pleased that I do—but it’s something I do during the year. I’m doing it for my benefit, it offers me peace of mind. You’ve got to keep your mind going or you’ll lose it.”

Next up for Wilda is a series of flannel throws for her twin great-grandchildren based on one she made for their dad when he was a boy.

“I thought, wouldn’t it be kind of neat to make the same flannel throw for them that I made for him? And he has a little girl that’s five, and I can’t give the boys something and not the girl, so I’m making three little flannel throws right now,” said Wilda.

And, thanks to years of organization, the throws aren’t just going to be similar, they’re going to be exact replicas.

“I keep a file of a lot of things and, sure enough, in my file cabinet I had the file of the pattern I made for him—all the animals and everything,” said Wilda.

To see Wilda’s work and all of the other winners in this year’s Art is Ageless® competition, visit artisageless.org.

Posted on
September 30, 2021
by
filed under
Art is Ageless
Residents
« Back to Blog