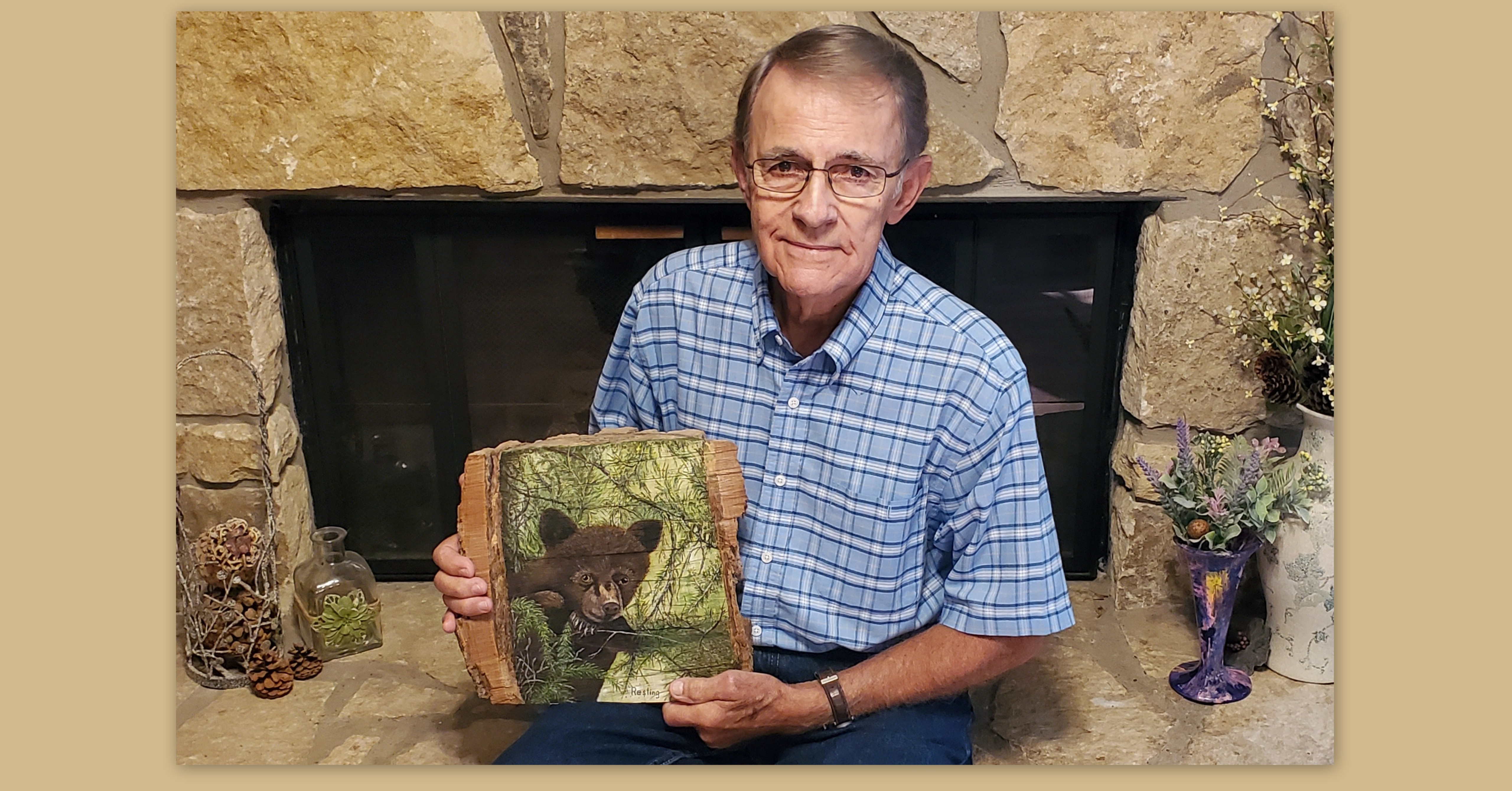 Arkansas City resident Eldon Eastman was awarded first place in the amateur painting division of the local Art is Ageless® juried art competition last spring. His painting, “Resting” – which depicts a bear lounging in a pine tree and was painted on a piece of an actual tree – also won the competition’s “Judge’s Choice” award and will appear on a special postcard included in the 2022 Art is Ageless calendar.

“I’m very tickled. I’m sure other people have just as much talent, but I’m certainly appreciative of it,” said Eldon. “It’s fun to try out things, and when you have a little success with what you enjoy it’s icing on the cake.”

This makes the third time in three years that a painting by Eldon has taken home the top prize in the local competition—not bad for a relative newcomer.

“I’d never entered in an art contest before in my life, but for some reason three years ago I started painting more, and Art is Ageless caught my attention because I had a friend who entered several years ago in woodworking. I visited with him about the competition and thought what the heck, we’ll give it a try,” said Eldon.

While the competition part of it may be new to him, art is not. Eldon’s love of creation and willingness to play with various media to express himself began at an early age.

“We went to a rural school close to our farm, and every Tuesday an art teacher would come and teach art to us. She was really good. She would take us outside and let us look around and find something of interest and draw it, then we’d go back and paint it in school. So that’s how my interest progressed. I started with Crayola, then watercolor, then pastel then oil paint,” said Eldon.

And the lessons he was taught by that teacher stick with Eldon to this day.

Growing up on a farm, Eldon has always been drawn to nature when looking for the inspiration for a painting, but in the process, he has often found something much more personal.

“This world is so hectic and full of meanness. When I can sit down with a painting and enjoy something that my eye has a real interest in, it just kind of refreshes me, and I lose the everyday concerns that I have of this world of ours,” said Eldon. “Mother Nature is the answer to my love of painting. If you just look around and open your eyes, you’ll find a lot to be thankful for.”

To learn more about PMMA’s Art is Ageless juried art competition and find out how you can get a 2022 calendar for yourself, visit ArtIsAgeless.org.